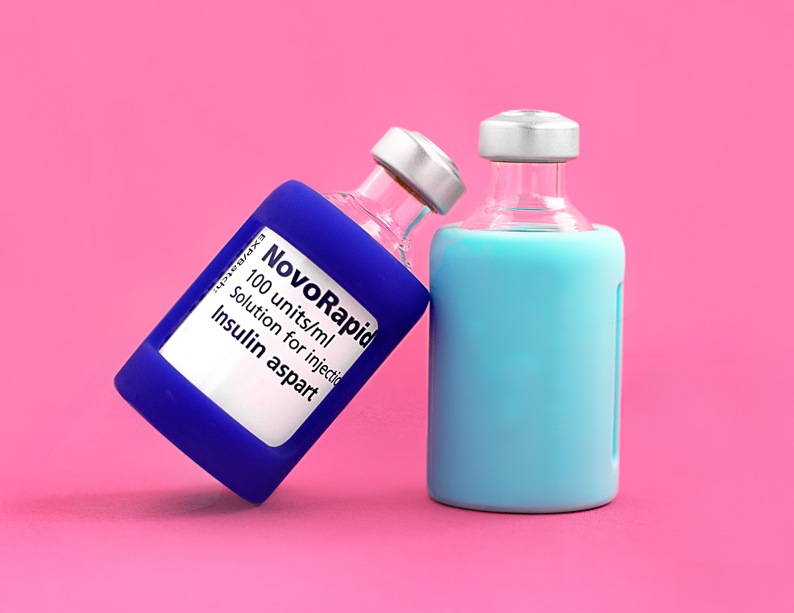 Insulin Therapy: What is Insulin and how is it used

If you have been newly diagnosed with diabetes, or know someone who has, you may have a lot of questions.

Some of those questions may be about a new medication you have been prescribed called insulin. Insulin is a medication commonly used by people with diabetes to allow them to treat their condition.

This article will explain what insulin is, why you need it, and how to administer it to yourself through insulin injections.

Insulin is a hormone that is made by specialised cells in an organ called the pancreas. Insulin regulates blood glucose (sugar) levels — it is released into your bloodstream and acts on cells throughout your body, causing them to take up glucose from your blood. Insulin also regulates carbohydrate, fat and protein use.

Insulin was first isolated and purified in 1921. The experiments that proved that this new chemical could lower blood glucose levels won the scientists the 1923 Nobel Prize in Medicine. You can read more about the discovery of insulin in our brief history of insulin.

Insulin is a very commonly used drug all over the world. It has been estimated that globally 150–200 million people use insulin.

Do you have to inject insulin?

Millions of people give themselves insulin every day. Unlike some medications that can be taken as a tablet or swallowed as a liquid, insulin has to be administered via subcutaneous, intravenous, and intramuscular routes.

People with diabetes most commonly administer insulin subcutaneously, by using a needle attached to a syringe or an insulin pen or by using an insulin pump.

Which type of diabetes requires insulin?

There are several different types of diabetes. For some types of diabetes, insulin therapy is absolutely vital, while others may or may not be treated with insulin. This may depend on factors such as how the condition has responded to other treatments, therapies, or preventative measures.

In type 1 diabetes, the insulin-producing cells in the pancreas are destroyed by the body’s immune system, trauma or injury to the pancreas. This causes a lack of insulin which can only be treated by replacing the blood glucose-regulating hormone through insulin therapy.

Insulin is always required in type 1 diabetes and is a vital element of their therapy.

In type 2 diabetes, the body’s cells become resistant to insulin. The exact cause of type 2 diabetes is unknown, but factors such as genetics, weight and lifestyle play a role. The pancreas attempts to counteract this resistance by producing more and more insulin — however, this eventually leads to exhaustion of the insulin-producing cells in later stages of type 2 diabetes.

Gestational diabetes develops during pregnancy. It can be treated by dietary changes and exercise, but insulin may be required if diet and exercise fail to control blood glucose levels.

Maturity onset diabetes of the young (MODY) is an inherited condition where a genetic mutation stops the pancreatic cells from secreting insulin properly. It can be treated by drugs called sulphonylureas, but insulin may be needed.

What types of insulin are there?

Insulins can be classified in different ways. One of these ways is by how fast the insulin acts once injected:

Insulin is also available as a mixture of rapid or short-acting insulin and intermediate- or long-acting insulin. This is called premixed insulin.

Where can I administer  insulin? 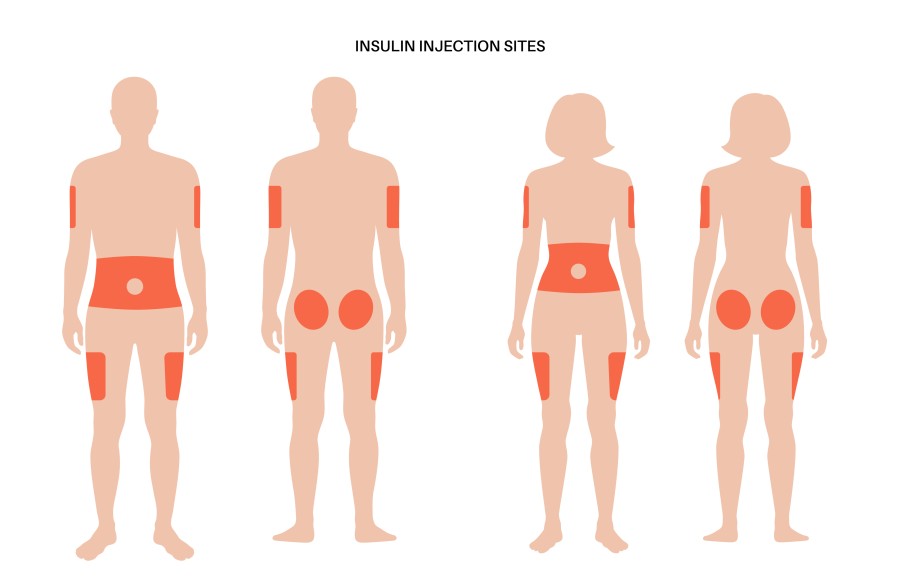 Where can I administer insulin?

Insulin is most commonly administered  into the subcutaneous fat just underneath the skin, called a subcutaneous injection. Injecting under the skin is considered easier and more convenient than other injection methods, such as intravenous (into a vein) or intramuscular (into a muscle).

The sites that are recommended for insulin injection include the abdomen, thighs, buttocks and upper arms. It will be administered through a needle in a syringe or pen, or by an infusion set/cannula for an insulin pump.

Not all sites will be appropriate for everyone who needs to inject insulin. For example, abdominal injections are not suitable for those who cannot pinch half an inch of fat to inject.

It is also recommended that you ‘rotate’ injection sites — which means not repeatedly injecting into the same place — in order to reduce complications that can occur when injecting, such as the formation of scars, fatty deposits. However, it is worth noting that insulin is absorbed differently from different sites [4], so rotation is advised within a set area.

Every medicine can come with side effects, and insulin is no different.

The effects of insulin on the body can include hypoglycaemia and weight gain. Rarely, they may include electrolyte disturbances like hypokalemia.

Insulin is  an important treatment for people with diabetes. Your healthcare team will teach you how to manage your diabetes using insulin, and how to use it correctly and effectively within your chosen insulin therapy

If you want further information about insulin, injections or about effectively managing your diabetes, your healthcare team will be able to point you in the right direction. 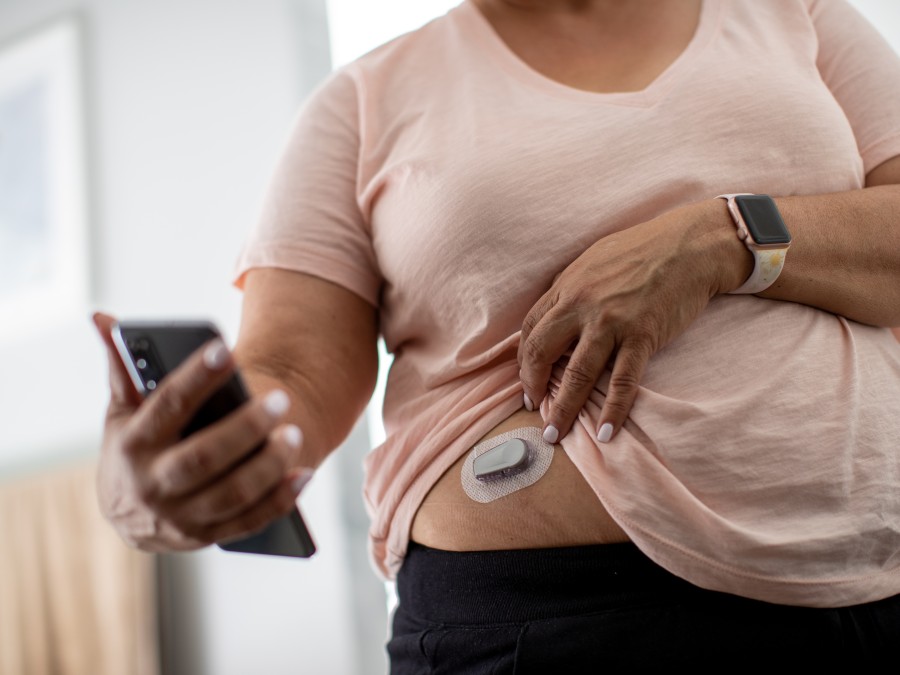 What Is A Continuous Glucose Monitor (CGM)? 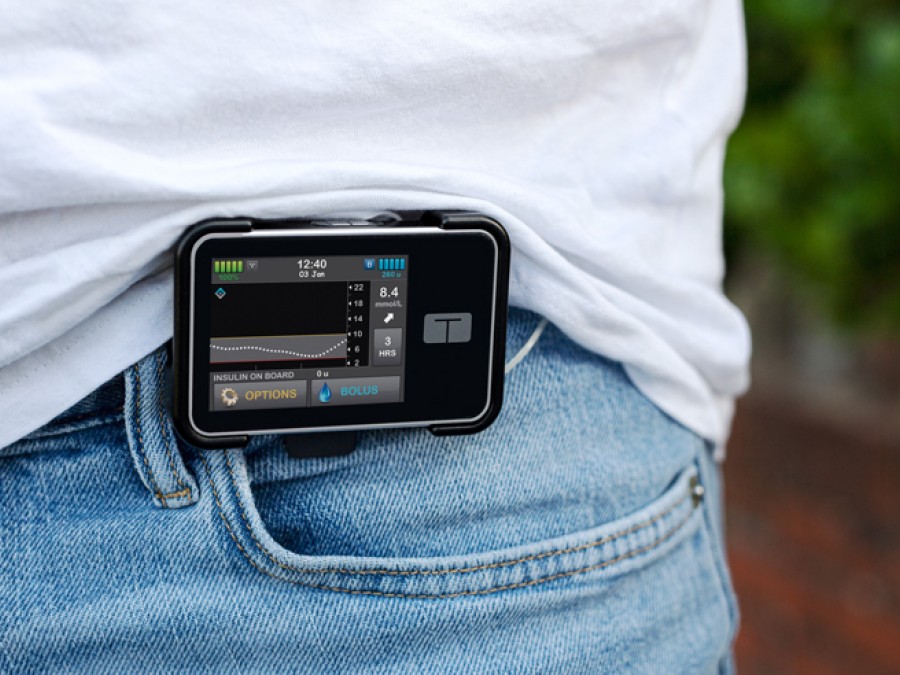 What Is An Insulin Pump And How Does It Work?

Get the latest information about Insulin Therapy